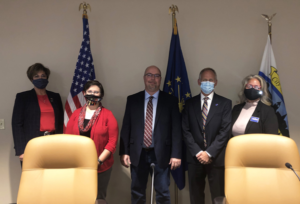 Candidates for the Indiana House and Senate took turns Wednesday answering 10 questions on a variety of topics from COVID-19 to teaching and health care.

Goshen Republican Rep. Curt Nisly sent Gov. Eric Holcomb a letter Monday questioning his authority to close bars and restaurants and calling on him to rescind the order.

“Are you going to stand up for the rights of Hoosiers and let them conduct business like they see fit? Or are you going to use the heavy hand of government to let fear control Hoosiers?” Nisly said. The Journal Gazette Story

INDIANAPOLIS, Ind. — For the fourth year in a row, an Indiana lawmaker has proposed a bill that would declare that life begins at conception and would consequently outlaw abortion in the state.

It notes that the legislature derives its power to issue laws outlawing abortion from the Tenth Amendment, which outlines, “The powers not delegated to the United States by the Constitution, nor prohibited by it to the states, are reserved to the states respectively, or to the people.”

In its summary, HB 1089 proposes to repeal “the statutes authorizing and regulating abortion.”

The bill challenges the U.S. Supreme Court’s position on abortion and would likely meet an immediate legal challenge, similar to other state bans passed recently.

INDIANAPOLIS — A proposal introduced in the Indiana House of Representatives this week would ban abortion in the state at any point in the pregnancy.

The 37-page bill changes every reference of fetus to “unborn child,” and states that the “general assembly finds that human physical life begins when a human ovum is fertilized by a human sperm.”

INDIANAOPLIS (WAND) – An Indiana lawmaker has introduced a bill that would ban abortions in Indiana.

The bill filed by Rep. Curt Nisly (R) of Goshen would repeal the statutes authorizing and regulating abortion, according to the bill summary.

The proposed bill would make abortion illegal in Indiana, even if it is legal according to federal law. The bill begins, “Any act, law, treaty, order, rule, or regulation of the United States government that fails to protect a person’s inalienable right to life is null, void, and unenforceable in Indiana.”

It also expands the definition of a human being to include the moment of conception, “Human being means an individual who having human physical life (as described by IC 16-51-1-1), regardless of whether the individual has been born.”

The Indiana House scarcely approved a bill Tuesday that will abolish 13 township assessor offices around the state – including Wayne Township in Allen County.

More than a dozen legislators spoke for and against House Bill 1027, which passed 53-44 and now moves to the Senate.

The bill overrides voters’ wishes from referendums in 2008 and would go into effect in 2023.

Rep. Curt Nisly, R-Goshen, talked intently with teachers from Triton School Corp. in Bourbon in the hall at one point. He even brought his daughter, who is in college studying to be a teacher, along for the day. Triton has students from Marshall and Kosciusko counties.

“I feel like he more understands where we are coming from,” special education teacher Jenny Mevis said. “There are misconceptions about what we see in the classroom versus what legislators are told.”